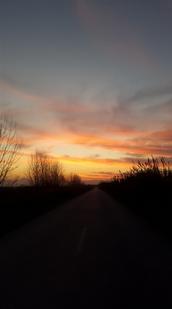 You like to tempt Fate, don’t you? Ain’t it a thrill to have her ride shotgun while you haul ass from the latest mess you created? Or to call her up time and again like some lover who can’t quit you? Do you believe she will always go along for the ride, sit pretty as far as you’ll take her? Maybe I should tell you something before you forget who you’re playing with.

I see Fate every time I look in the mirror, and it isn’t just the name my mama gave me. Believe me when I say I might be your lover, but I can quit you. Just like that.

Let’s go for a ride. I call shotgun.

Feel that warm Oklahoma air coming through the open windows. See those cornfields planted in rows of dead dirt, their dried scarecrow stalks baked by the sun. While you drive, I’ve got my foot out the window, hand riding a rollercoaster in the draft next to my knee. We’re on the road you chose. It might be easier to look back on had you not taken so many wrong turns getting here. If so much of the past wasn’t something you try to forget. If you could believe the lie when you tell yourself you ain’t like you used to be.

I like to lean my face into the wind and pretend for just a moment that the guilt can all be blown away. But that doesn’t even work for me. And I’m not you.

Your thumbs drum the steering wheel while your mind works out a plan to smooth over that mess you made back in Tulsa. Problem is your plans don’t amount to a hill of beans once you’ve met me. You think I’m preoccupied with those puffs of clouds napping in the open sky. That I’m just over here enjoying the ride. I’m not watching those clouds. I’m thinking about you. About how anyone could be that arrogant, that easily aroused by their own ego. What a gift that must be.

The speedometer dips as the road climbs, and a sunbeaten billboard warns there’ll be no gas for 40 miles. Oklahoma blacktops go straight long enough for the monotony to hypnotize you. Then you barely top a hill before a blind curve comes at you fast. Life’s like that too, ain’t it?

Just ahead at a rundown two-pump filling station, a woman sticks a nozzle into a light blue sedan. She’s keeping her back turned toward the highway, but she can’t hide herself from me.

Gravel crunches beneath the tires as you steer off the asphalt onto the filling station lot and pull up to the other pump.

I slip on my sneakers and climb out, stretching my arms. The woman’s glance hesitates then lingers on my unencumbered breasts outlined clearly through a thin white tank top. When she catches my eye, I lower my gaze to her well-supported curves pushing the limits of a respectable blouse. She’s got herself wrapped up nice, but the hard lines around her Bette Davis eyes tell me we aren’t that different inside the packaging.

“Want anything?” I ask you.

Just barely loud enough for the woman to hear as I walk by, I say, “Lovely.” She’s never heard that enough. I might’ve met her someplace else if she had.

I find the bathroom, then grab a beer and bag of cashews on the way to the register.

You’re hanging the nozzle back on the pump when I climb into the passenger seat and pick up my little black notebook. While you go inside to relieve yourself, I do a quick sketch of the woman walking in to pay for her gas. I draw her in a pin-up girl brassier and curve her lips into a pout.

I’m eating cashews from my palm when the two of you exit the station together, you holding the door for her. We pull away, and I watch in the rearview as she finds the drawing tucked beneath her wiper blade. Her eyes follow us toward the road.

You twist the cap off your beer, toss it out the window, and say, “Don’t ever draw me in that book of yours.”

I slip my finger beneath the elastic closure that keeps my sketches from prying eyes. You’ve already got us back on the road. By now you ought to know where we’re headed.

For the third time, the woman reads the inscription I penned beneath her portrait. "A person often meets his destiny on the road he took to avoid it." – Jean de la Fontaine

She reaches into the glove compartment for a manila envelope folded around a stack of bills. Twenty-thousand dollars has taken her two years to beg, steal, and borrow.

She hears me whisper, “Just when you tell yourself you got away there I’ll be, a shadow you can’t shake.”

A shiver slides down the back of her neck. She tosses the money onto the seat and spreads the drawing of herself across the steering wheel. The hand that drew it rides the wind outside the passenger window of the red hatchback in front of her. Her lead foot caught up to the car not long after it left the gas station.

That pack of cigarettes in her purse would help her trembling fingers, but she’s given those up. Remembered ribbons of fire wind through her lungs and her veins, and she glances toward the ashtray. No, she tells herself.

In the rearview, smooth, black tar snakes behind her.

She lowers the visor against the glare of the sun setting low on the horizon, and a photograph curled at the corners falls into her lap. Her precious son was two years old when it was taken, one arm clinging to a monkey bar, legs dangling over the playground sand below. Such a happy boy. He will turn five tomorrow. She presses the photo to her breast. In less than an hour she’ll see him again. This time she will do it right. This time will be different. She believes Fate is giving her another chance, a chance to prove how strong she can be.

She tells herself the woman who adopted her son is being illogical. The man is downright angry, demanding to know how she found them. The records were supposed to be sealed. They had paid twenty thousand dollars for a legal adoption. No, she couldn’t visit. No, she couldn’t be a part of his life. She had given up her parental rights when she stuck a needle in her arm and left her baby alone in a park. He loved the park. And she had been cleaning herself up since then. All she needs is her boy back. Then her nerves will settle. Her thoughts won’t race. Her body won’t crave anything else. She has the twenty-thousand dollars. She isn’t going to steal him. She’s buying him back. If they refuse the money, she’ll leave it where they can find it, and take him where they can’t.

The setting sun almost blinds you to the curve. You don’t see the trucker coming. But I do. The smooth gold band on his finger glides across his cheek as he rubs the burn from his eyes. Driving a big rig can drain a man. It’s been a long haul, but he’ll finally get some shuteye once he reaches Tulsa. Maybe when he wakes up, he’ll run into that wild little thing who climbed into his cab there at the truck stop last week. What’d she say her name was? Desiree? Destiny? He grins. That’s right. She said he’d met his fate. Hell, he’d pay fifty dollars for that fate anytime. He pulls the picture she’d drawn from the door pocket. It sure looks a hell of a lot like him, if he ever wanted to dress up like the Grim Reaper. He hasn’t been able to figure out why she drew a sickle in his hand. Maybe she thought he was one of them that drive rigs so he can pick up whores to carve and dump by the road. He sure doesn’t have time for that. Hell, he hasn’t seen his wife and kids in two weeks and hasn’t slept in two days.

He starts daydreaming about letting go of another fifty dollars until he has to unlatch the seatbelt and reach into his pants to give himself a squeeze. That squeeze turns into a full-fledged love affair, and by the end of it he steps on the gas so hard the big engine roars. The rig hits the curve faster than he means for it to. He fights to get her back on the road, but that soft shoulder is going be the death of him. And a jackknife is going to be the weapon she uses.

He sees the two cars headed for him, but he can’t stop that trailer. The little red car hits it first. The explosion slams his brain against his skull and throws him sideways. His face is smashed against the driver’s door window like he’s in one of those glass bottom boats watching what swims up under him. Is that a body face down in the road? Where’d that little thing come from? The blue car swerves, hits the shoulder on the other side, and misses the back of the trailer within inches.

There’s the sound of metal scraping even after your hatchback goes off like a bomb. Somebody back in Tulsa is going to cry for you, but you ran off and left her, so she’s already crying anyway. Smoke is pouring from beneath the tractor trailer blocking both lanes. The odor of burnt rubber lays heavy at the back of my throat, and my bloody palms sting as I lift myself off the road. I’ll be limping for a while. Just another day on the job.

The trucker is staring dead-eyed through the window of his door like he can see me. I wave my fingers at him. No, he isn’t seeing anything anymore. In the blue car on the shoulder, those Bette Davis eyes are watching my every move. I hobble over, lean in the open window on the passenger side, and pick up the package on the floorboard.

The weight of the bundle in my hand feels about twenty dollars short of my standard fee. If I’d made a bet at the start of this journey, I wouldn’t have wagered on the junkie being the one who paid my bill. But life is full of surprises, ain’t it?

“You don’t really want to do that, and I couldn’t let you if you did. Hop out now. I’m going to need your car. It makes things messy if I stick around.” I reach into the ashtray and hand her the piece of tightly wrapped foil she’s been trying to forget she stuck there. “You spent twenty dollars of my money. I don’t like getting shorted, but this will help explain things. Now, get out of the car, honey. I believe you were walking across the road here, and that trucker swerved to miss you.”

“You bitch,” she says, tears welling in her eyes.

“No. That’s my sister, Karma. I’m the one you’ve always been destined to meet. You’ve been on a collision course with me for a long time now. This is how it ends.”